Book Review: The Book of Mormon

It's been a while since I wrote a book review, but this book. 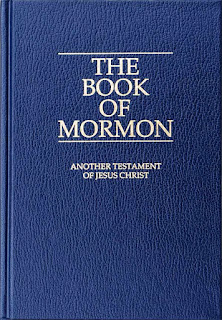 The Book of Mormon is a compilation of accounts written over the span of thousands of years that tells of three groups of people who were driven from their homeland due to religious persecution. Eventually, all three groups found refuge somewhere in the Americas: the people of Lehi--who split into the Nephites and Lamanites, the people of Zarahemla--who eventually joined the Nephites, and the Jaredites--who we read about briefly in the book of Ether. Comprised of books written by ancient prophets, the purpose of The Book of Mormon is to testify of Jesus Christ. The book was translated by Joseph Smith Jr. in 1830 and is available free to anyone who wants to read it. (Details at the end.)

I've read The Book of Mormon before, but one of the things that struck me this time as I read more rapidly than usual was the different voices that came through in the many books. You can tell especially in the first seven books (1 Nephi through Words of Mormon) that each author has his own pacing, his own way of describing things, and special words and themes he uses more frequently. For example, Nephi focused a lot on his trust in the Lord to be obedient to his commandments. His faith was unwavering as he was led time and again to do things he never would have done except that he was commanded to do so. His absolute trust in the Lord was apparent in all his writing. Nephi tells us that his people are a branch broken off from the twelve tribes of Israel.

After the first six books, we are introduced to Mormon, who abridged most of the remainder of the book from other records. Born around AD 311, Mormon served as narrator to tie together the stories found in the book. He includes many passages of direct quotes from other prophets through the years, such as King Benjamin, King Mosiah, Alma, Samuel, and many others.

After Mormon dies, his son, Moroni, takes over. Moroni includes a brief glimpse into a more ancient record he has access to that tells of another group of people, the Jaredites, who lived and died many centuries before the birth of Jesus Christ. His abridgment is taken from a record written by Ether, the prophet who witnessed the destruction of the Jaredite nation.

This action/adventure book has it all: wars, journeys, intrigue, angels, destruction, salvation, and love. A few of my favorite stories include the following:


The entire book points to a single event in 3 Nephi when Jesus Christ visits these people on the American continent. Over the course of several chapters, he teaches the people as he did in Israel. He tells them, "Behold, I am Jesus Christ, whom the prophets testified shall come into the world" (3 Ne. 11: 10). He ministered to them, healing their sick, blessing their children, and allowing them to feel the nail prints in his hands and in his feet. He showed them, and they testify to us, that he lived again after he died, that he still lives, and that he atoned for our sins. That we, through him, can live again.

This book changed my life once again.

You can get a free copy of The Book of Mormon or read it online here.

A few of my favorite scriptures from this book (how can I choose?):

Posted by Marilyn Bunderson at 10:29 PM

Blog Tour! Check out these reviews

Giveaways, Check It Out!

"The Mark is a fantastic book, with a great plot line and an easy-to-love cast of characters. I was hooked from page 1. It was such a page-turner that I even took it with me and read it on a cruise ship. I just couldn't put it down! It's an enchanting story, with mystery, romance, action, humor and suspense- I can't wait to get my hands on the sequel."
--Anna

It's fun and full of mystery. Books with those aspects tend to draw readers in, like myself. I love the way the book keeps you on edge, and anticipating the turning of the next page. The mysterious and unique qualities portrayed in The Mark, are liable to send your head spinning and keep you hungry for more."
--Abby

"The Mark is a GREAT book! I loved the original storyline of the book, it is not your same old same old. You are drawn in to the book from the beginning and are hooked until the very end. It kept me intrigued waiting to see what would happen to Tori and her friends. I loved it!"
--Morgan

"I loved The Mark with its fun story line and real life feel. I was drawn to the characters and into this world full of puzzles until the very last page! I hope there's a sequel coming!"
--Betsy